Has History Taught Us Nothing? 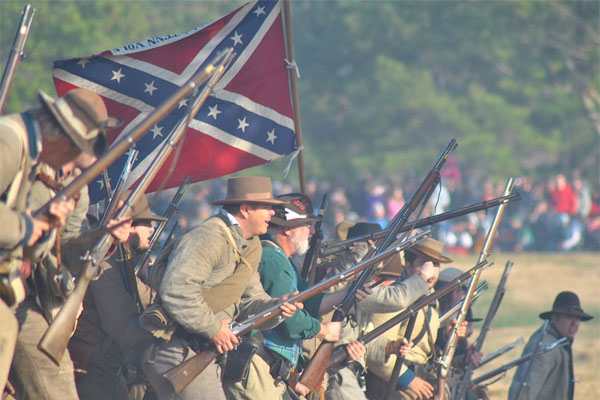 I’m sitting here watching Gods and Generals, a prequel to the movie, Gettysburg. It’s amazing to me how much the struggle during those days kept reminding me of today’s struggle for gay rights.

Southerners so often used the Bible to draw strength and justification for their cause, despite Scripture’s clear and unambiguous teaching of principles that render slavery ungodly (e.g. our equality in Christ, that we show no partiality, and, above all others, that we love our neighbor as ourselves). Yet somehow, they didn’t find the cause for which they took up arms as inherently in conflict with their faith.

Over and over again, they touted freedom as their cause—freedom from the oppression of the North. Now, this wasn’t artistic license employed by the film writers. If you do even a small amount of historical research, you’ll quickly find that this was, indeed, their worldview.

It’s so mind-boggling that people could claim to love and defend freedom, while at the same time fighting to sustain a way of life that had, at its core, an institution that was the very antithesis of freedom—slavery. Were they so blinded by their socio-political worldview that they literally couldn’t see the most obvious contradiction in existence.

I find that this is the same dichotomy that pervades the modern debate concerning homosexuality and gay rights. Those who oppose homosexuality are so loud in their advocacy for freedom against the tyranny of “big government,” yet they so easily impose their tyranny against people whose “lifestyle” they disagree with. They scream about religious freedom, but what they really want is the freedom to impose their religious views on everyone else. It’s the kind of stuff that will make your head explode if you think about it too long.

How can someone claim to cherish freedom, while advocating the suppression of the same for others? Would that they had no notion of freedom, than to so blatantly violate its core principles.

This embarrassment of hypocrisy is joined by the Christian Right’s failure of theological integrity. It’s difficult at times to determine whether a person’s position is a result of bad theology infecting their political philosophy, or the opposite. Either way, there are two fundamental missteps that drive the anti-gay Right: bad theology, and hypocritical politics. I can only hope that one day, as the South came to know, truth and justice will triumph over the oppression of modern day bigotry.